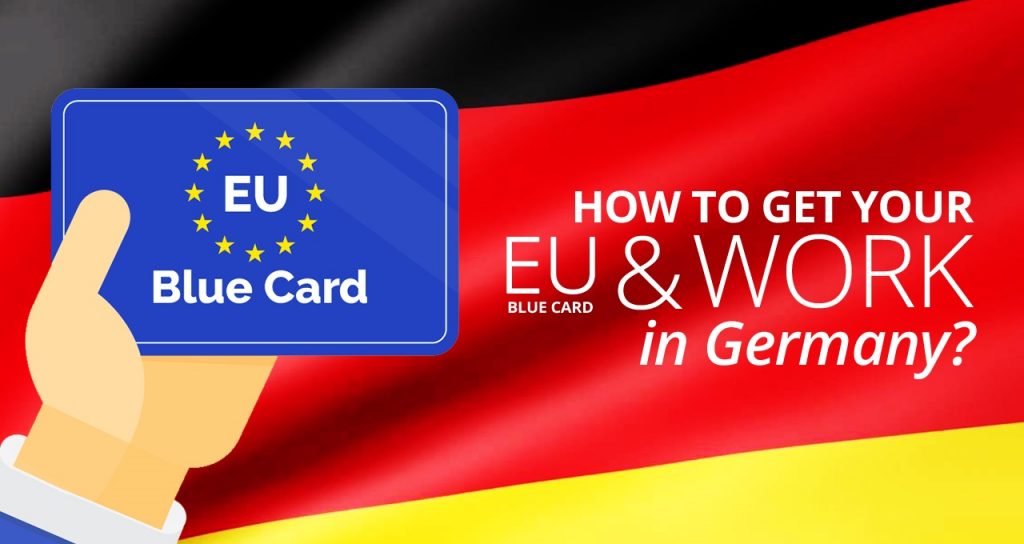 The Blue Card EU Germany, also known as the EU Blue Card Germany, is a residence permit, i.e. proof of the legal residence of a third-country national in an EU member state for the purpose of gainful employment. The Blue Card is therefore intended for non-EU nationals. For members of EU countries, freedom of movement applies with regard to their stay. The EU Blue Card Directive is part of German law since the 1st of August 2012, as a result of the Act implementing the Highly Qualified Directive of the European Union. The main regulation is § 19a Residence Act. The following are the answers to some of the key questions regarding the EU Blue Card Germany.

Who can apply for a Blue Card?
A foreigner who is a non-EU country national can apply for Germany if he is:
1. Either a holder of a recognized foreign or German university degree
2. Has an employment contract with a gross annual salary of at least € 55,200 (€ 4,600 per month). In so-called “shortage occupations” (natural scientists, mathematicians, engineers, doctors and IT specialists) a gross annual salary of € 43,056 (€ 3,588 per month), is sufficient (2020).

How long is a Blue Card valid for?
The EU Blue Card is initially valid for a maximum of four years. If the employment relationship lasts for less than four years, ie if it is limited in duration, the blue card is awarded for the duration of the employment contract plus three months. It can then be extended or a settlement permit issued.

Does a visa procedure have to be carried out when moving on within the EU?
If a foreigner wants to move on within the EU, no visa is required in almost all EU countries. The application can be made domestically. In Germany, the application must be made within one month of entry into Germany.

Is a priority check carried out? Are members of the German labor market treated in a privileged way?
Priority testing checks whether German workers are eligible for the job. Such a priority check is waived once the aforementioned salary limits are reached. However if a salary of at least € 41,808 is paid, a priority check will be made for non-shortage occupations so that a Blue Card can be issued.

Implementation of the Highly Qualified Directive of the European Union
The EU Blue Card is based on a European Union Directive, namely Directive 2009/50 / EC on the Blue Card. The purpose of the EU Blue Card is to grant highly qualified third-country nationals residence in the EU. This is intended to counteract a shortage of skilled workers. The licensing rules of the individual EU states remain unaffected by the EU Directive. It does not regulate the immigration of third-country nationals who enjoy protection under international obligations residing in the European Union for research purposes or who can not be deported as part of family reunification. The holders of the blue card EU (blue card) should receive the same remuneration as the Union citizens in a comparable position. Equality of entitlement to vocational training or social assistance is not required but should be sought. The blue card is temporary. The validity period is one to four years. The format of the EU is uniform and complies with Regulation (EC) 1030/2002.